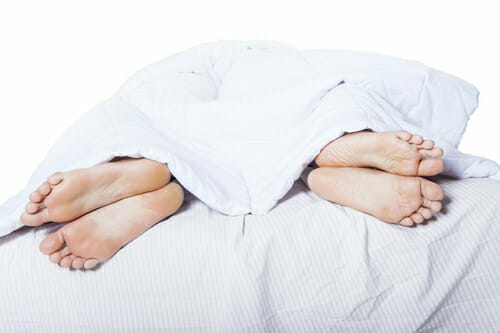 But whatever the reason, we need to talk about sex, because it’s an important part of marriage.

In a Huffington Post article entitled “Study Says Sex Is Key To A Happy Marriage,”  researchers from the University of Chicago speak of a link between sexual satisfaction and marital satisfaction. The article states:

“Galinsky and Waite found that men and women who were sexually inactive or engaged in very little sexual activity reported lower levels of marital satisfaction, whereas couples who had more frequent sexual encounters (including any sexual act, not just intercourse) had happier, more positive marriages.”

And get this – this research was done with couples between the ages of 57 and 85! This tells us that sex in marriage is not just a young couples’ sport. It’s important throughout the life of the marriage.

Yet, despite it’s importance, many couples are dissatisfied and struggling with their sexual relationship. Why is it that married couples – who have made a life-long commitment to one another and have experienced the joys of open, naked closeness – continue to struggle with sexual intimacy?

There’s only so much I can cover in a blog post, so let’s focus in on 4 things that can disrupt your sex life in marriage:

Now before an angry horde of spouses (mostly fatigued mothers and frazzled business women) hunt me down with torches and pitch forks, let me explain what I mean when I say laziness.

I’m not talking about skipping-work-laying-on-the-couch-letting-the-house-and-yard-go laziness. I’m talking about the laziness of not making priority space and time for sex with your spouse.

Even the Bible warns spouses about neglecting their sexual relationship. That’s right! It’s right there in the Bible! Check out 1 Corinthians 7:1-5 if you don’t believe me.

If you want to improve sex in your marriage, you can’t be lazy. You have to work at it. You have to make it as important as getting your kids to the doctor or your car in the shop. You may have to…

Be creative, but don’t be lazy. Do whatever you have to do to make sex a priority in your marriage.

A lack of learning can disrupt your sex life. Do you remember what you learned about sex when your were growing up? I do. It was plain and clear. “Keep your pants zipped!” That’s the only message I got. I know of one woman who said, the only thing her mother told her about sex was on her wedding day when her mother said, “Don’t get pregnant right away!” She didn’t say anything about how you get pregnant. She just said “Don’t!” I know another lady who once told me, “The only thing I learned about sex from my mother was that I wouldn’t like it, but I had to endure it, because it was my duty.”

Maybe you were lucky and had parents that taught you about the joys of sex expressed at the proper time and in the proper context, but most of us were not that lucky. We got cryptic messages from embarrassed parents that left us wondering and guessing about what was right and what was wrong. We were led to believe that sex was “dirty” from parents who were afraid we would abandon morality for pleasure. We were told “Don’t!” repeatedly until the day we said “I do.” and then we were on our own.

This left us to learn from friends who were not the experts they claimed to be, and from movies that set the bar unrealistically high and left us with cinematically scripted expectations that could never be met.

If you want to improve sex in marriage, you need to become a life long learner about realistic sex in a realistic marriage. You can learn by reading good books on sex together. You can learn by asking your spouse what they like and want sexually. You can learn by going to the “links” tab at the top of this page and clicking on the sex links. When it comes to sex with our spouse, we all need to humble ourselves and learn all we can.

Some people have hurts and wounds that have left lesions on their heart and disrupted sex in marriage. Here are just a few such lesions that can interfere with sex in marriage:

These are just a few of the many lesions that can disrupt sex with your spouse.

If you want to improve sex in marriage, you must deal with the lesions that are getting in the way. If it’s something your spouse said, did, or didn’t do, you need to talk to them. Do it when the offense happens. Don’t sit on it. Explain how that effects you when it comes to sex and ask if the two of you can work on that.

If it’s something from your past, then seek out a friend, a pastor, or a counselor who can help you work through that so it’s not disrupting sex with your spouse.

Low testosterone, especially in men, can interfere with sex drive. Likewise, hormonal imbalances can obstruct sex drive in women. Certain medications can inhibit your interest in sex. Depression and anxiety can interfere with libido. Even things like a thyroid that isn’t functioning properly can cause problems when it comes to sex.

If you suspect there’s more disrupting sex than just laziness, learning, and lesions, then you need to see your physician and ask them about any possible hormonal and pharmacological reasons for sexual problems.

Sex is not the most important thing in marriage, but it’s not the least important thing either. It needs the same care and attention as any other area of your marriage. The more a married couple works at sex, the more sex will work for them.

And now for the homework… (Just kidding! You probably already know what you need to do for homework.)

Which of the 4 things do you most struggle with when it comes to sex in your marriage? What’s one thing you need to do to help with that? As an experiment, make a commitment to do that one thing for the next month or two and see if you notice a difference…not just in your sex life, but in your marriage.