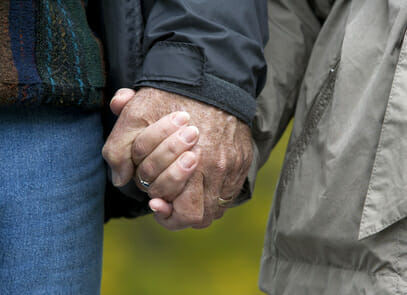 When you’re dating, holding hands is one of the first big milestones.  Getting there can be awkward, but once you’re holding hands, you feel it…”We’re a couple.”

Holding hands when married can be much the same.  It can be a little awkward at times, but it can also carry the same “We’re a couple!” feeling.

We hold hands while dating to feel more connected. But over the course of marriage, we gradually stop holding hands, because we already feel connected.  After all, we live together, pay bills together, share a bed together, have sex together, and raise kids together.  How much more connected can we be?  Why do we need to hold hands?

Few things thrill me more than seeing a couple (especially an elderly couple) holding hands.  It says something to me.  It encourages me.  It gives me hope.  And it will do the same for you and your spouse.  It’s simple, easy, and doesn’t cost you anything, but it pays huge benefits.  So turn to your spouse, and in your best old-school Beatles voice tell them…”I want to hold your hand.”

Leave a comment and tell us how you feel about holding hands with your spouse.