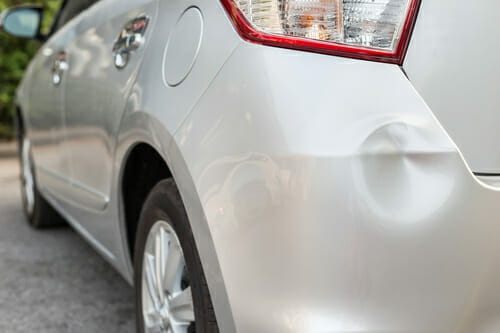 A few weeks ago, I had a fender bender coming home from work. It was a very minor fender bender. No one was hurt. There was only a small amount of damage to my car and no damage to the other car. We didn’t even have to call the police.

I was glad that the damage was so minor, but my car had been in pristine condition up until this point. Now there was this dent in the front of my car for everyone to see.

I became a little OCD about it. Every time I walked to my car, I would stop and look at the dent. When I went into the garage to get something, I would look at it. I was beginning to fixate on the dent.

So I took it to a body shop to get an estimate on repairing it. I went in thinking, “Oh, it’s a very small dent. It can’t be that much to fix.” That hopeful delusion was quickly shattered when I walked out with an estimate of over $1,000.

I don’t have that kind of money right now, and the car is in perfect working condition. Besides, the dent is really not that glaring. Theres no need to fix it. But, I hate the fact that everyone can see this dent. It’s not the way it’s supposed to be, and it’s driving me crazy.

So what did I do? Well for now, the dent is still there. The more time passes the easier it’s getting to accept, but I don’t know that’s a sign of reasonableness or complacency.

All of this got me thinking about marriage. You can’t go through marriage without getting some dents. A few of your marriage dents may be major dents involving things like:

The major dents must be taken care of, for they jeopardize the safety and functioning of the marriage. But most of your marriage dents will be minor dents involving frustration with things like:

Everyday habits. It’s one thing to date someone for a few hours at a time. But when the date never ends and you’re together 24/7, habits start to dent your marital fenders. Habits like:

There’s no doubt that these (and other) minor marriage dents can still cause some major marriage frustration, but the frustration is made worse when we begin to focus and fixate on the minor dents until they seem like major dents to us. (Of course I don’t do that, but I’ve heard some people do.)

So how do you tell if you’re looking at a major dent that needs to be fixed, or a minor dent that doesn’t necessarily need to be addressed? Start by asking yourself the following questions:

I’m sure there are other questions you could ask to evaluate whether a marital dent is major or minor, but these questions should get you started on figuring out the difference.

When it comes to marriage, sometimes you just need to learn to appreciate the car, with all it’s minor dents, and keep on rolling toward the destination together.