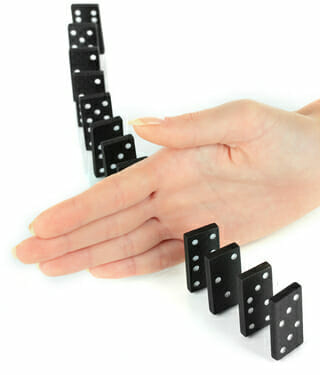 This time of the year, there’s a lot of talk about new year’s resolutions. Lose weight. Get organized. Eat healthy. Get on a budget. The list is long and varied, but the goal of each resolution is the same…a big change in some area of our life.

I heard a statistic that said 60% of people who make a new year’s resolution have abandoned it within six months. (Been there. Done that.)

But the results we get are less about the resolutions we make and more about the patterns we take. Here’s how it works…

I’m not saying this is easy. It’s not. That’s why 60% of us abandon our resolutions within 6 months. It’s hard to stick with that resolution to lose weight when you’re hungry and want that desert. But it’s easier to make small changes one decision at a time, than to make a broad, sweeping change with just one decision.

So don’t make a big resolution. Instead, make a decision to change a pattern…even if the change is small at first. That small change will produce a new pattern, as well as a new motivation to make further change.

Here’s hoping that this time next year you’ll be able to say, “I did something about “it” and I made progress!”

Isaiah chapters 3-4 speak to the people of Judah, who were in a terrible predicament at the time. In these chapters, God reveals the pattern that got them in that predicament.

But…God goes on to tell the people of Judah that they can experience restoration, (4:2-6). How? By changing their decision to rebel.

God would have us turn to Him when it comes to the small, front-end decision. Why? Because if we obey on the front end, rather then rebel, we will change the larger patterns and outcomes of our lives. That sounds good to me.

What are the patterns you hope to change in 2015? Let us know and support each other.