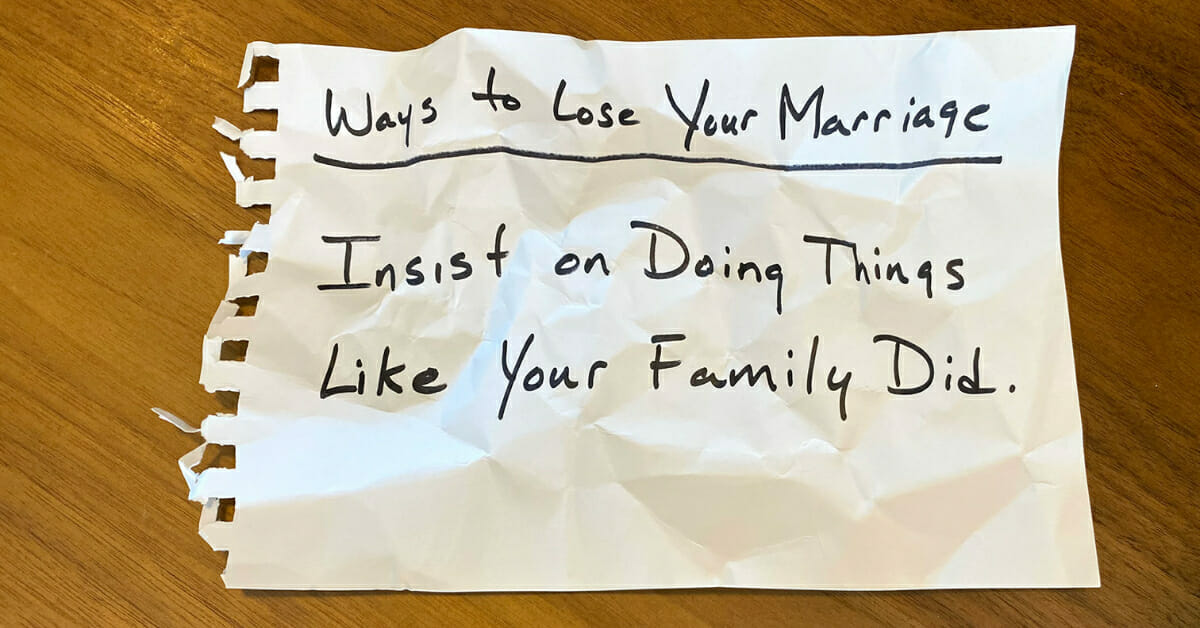 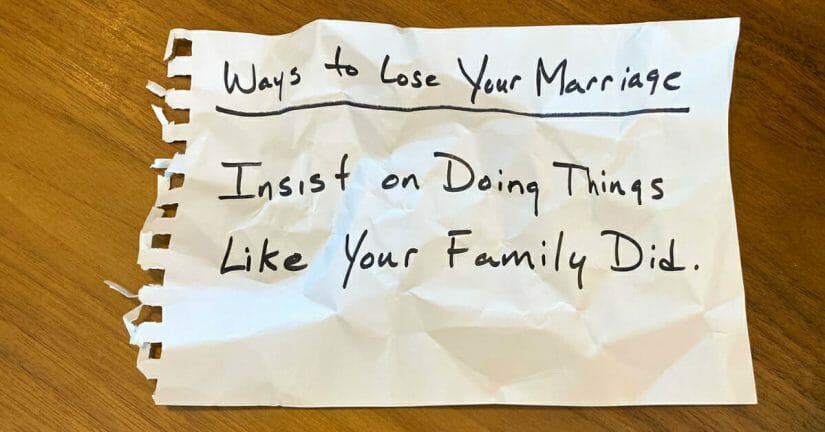 My wife and I had only been married for six months, and it was Christmas eve. We had finished dinner, and I was preparing to watch some Christmas specials when it happened. She asked me a question that jarred me. It came out of nowhere. I hadn’t expected it. I couldn’t even believe she was asking it. But there, on Christmas eve, she had the nerve to ask me…”So, you want to open presents now?”

Suddenly I realized that we grew up in families that did things very differently.

You don’t have to be married long to realize this. Perhaps…

You probably have other examples you could share, but when it comes to marriage, these are the types of things that dampen the relational magic and make things seem more like work.

WHY IS IT BAD TO INSIST ON DOING THINGS LIKE YOUR FAMILY?

Whether it’s holiday traditions or everyday ways of doing things, both you and your spouse come into marriage with different memories and experiences. Some of those memories and experiences you want to hold onto and recreate, while others of those you would rather change. But I can tell you that insisting that your spouse do things like your family did will hurt your marriage.

Maybe you’re just trying to recreate special moments from your childhood so your family can experience them too. There’s nothing wrong with that desire, but insisting on doing things as your family did is not good for the following reasons…

It’s disrespectful and belittling to your spouse and their family.

You come across as dictatorial.

Insisting on getting your way is never endearing to your spouse. And it’s especially hurtful when you’re dictating against some of their traditions or ways of doing things. This will leave your spouse with only two options: (1) They can roll over and be subservient, but this is going to create hurt and bitterness on their part. Or, (2) they can become rebellious and refuse to do things the way you want. This will create anger and resentment on your part.

It keeps the two of you from forming new ways that are uniquely yours.

Many wedding ceremonies involve the lighting of a unity candle. The bride and groom each take a candle symbolizing their family, and together they use those two candles to light a candle that symbolizes the start of a new family. Scripture calls it, “the two becoming one.” This involves more than just consummating the marriage. It involves the two of you melting and merging your ways and approaches into something new and unique to the two of you. Insisting on doing things the way your family did is the opposite of that.

SO WHAT CAN YOU DO?

It’s easy to say that the two of you should stop insisting on doing things as your families did, and instead find new ways to do things. But just how can you do that without becoming a doormat or a bulldozer?

Well, it will probably be a little different for each couple, but here are some general principles you can follow:

Let’s go back to my Christmas example. After applying the above steps, some possible solutions might be:

The options are many, depending on whether you have kids, how close you live to family, etc. The thing is to not get stuck in insisting the old way, but instead, move on to creating new ways.

I know that all of this can sound rather trivial. Who’s going to lose their marriage over whether they open presents on Christmas eve or Christmas morning? But it’s not just about holiday traditions. It’s about how you decide to do life. It’s about a failure to create your own marriage because one or both of you keep trying to live by old family patterns.