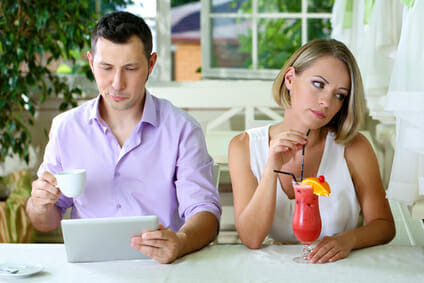 Ever notice the difference between the dating couples from the married couples in a restaurant?

The dating couples are animated.  They’re looking at each other, leaning into the conversation, laughing, asking questions, and telling stories.

The married couples?  Well that’s another story.  The married couples are not animated.  In fact, they’re close to comatose.  They’re not looking at each other.  They’re looking at the people in the restaurant, the TV, their cell phones, the floor, the ceiling.  It’s like watching boys and girls at an elementary school dance.  Girls are on one side of the gym, guys are on the other side of the gym, and both are hoping the other will make the first move.

I’m not sure there’s a definitive answer for why we stop making the first move, but some possible reasons might be:

There are many other ways you can make the first move in marriage.  It doesn’t have to be a chore or duty.  Make it a game to see who can beat the other to the first move.  It’s one of the best way to build love and respect in your marriage.  Ok…it’s your move.

Help some couple out.  Leave a comment and share some ways we can make the first move in marriage.

5 thoughts on “Try Making the First Move in Marriage”