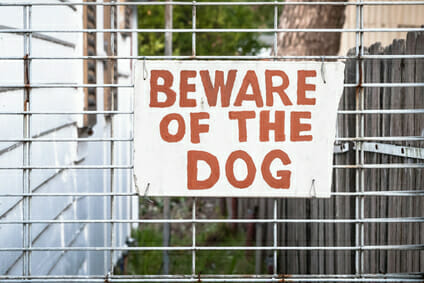 I walk most every morning in my neighborhood. It’s a great time for me to think, listen to music, pray, and make plans for my day. I’ve done this for years and have never had any problems with dogs.

But over the last couple of years, I’ve started having “encounters” with dogs in the neighborhood. More and more, dogs are coming at me snarling, barking, and threatening. I’ve even been bitten a couple of times with one of those “encounters” requiring a trip to the ER.

You might think I would have something against dogs, but I don’t. I had dogs growing up, and both my grown children have dogs of their own. But when I’m walking the streets of my own neighborhood and I’m getting threatened by someone’s dog, I start getting a little testy.

Now I know there are all kinds of dogs…

So what’s the point of all of this talk about dogs?

The point is that everyone has dogs, even if they’re not a pet owner. The dogs I’m talking about are those negative reactions we have toward people that aren’t really doing anything to us. These reactions are usually driven by some experience(s) from our past. For instance, I never flinched at a barking dog before…that is until I was bit by a couple. Now my reactions to barking dogs are driven by my past experiences.

What about you? Are your “dogs” out? Do your reactions need to be more controlled? Do they need to be on a leash? To find out, consider the following questions…

If you find yourself in one of the above categories, there are some things you can do to get your “dogs” on a leash…

There are probably other things you could do, but these will give you a start toward getting your “dogs” on a leash.

Don’t let your “dogs” scare off people from your “neighborhood.” If you do, your neighborhood will get lonely and people will be asking, “Who let the dogs out!”

Leave a comment and share other ways to get your reactions (or “dogs”) on a leash so they don’t scare or bite someone.