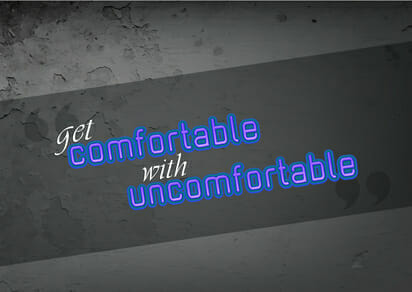 We often respond to being uncomfortable with one of 3 knee-jerk responses:

So what’s a better way to respond to being uncomfortable? I often tell the people I’m counseling that they need to lean into the uncomfortable. Here are some ways to do that:

The exception is when the discomfort is coming from something that is physically, emotionally, or sexually harmful. In those circumstances, you should protect yourself by removing yourself from the situation until the situation has been remedied.

A – Adapt your thinking and actions. Many times, being uncomfortable is a sign that it’s time to change or adapt what we think or do. It’s easy to get in a routine and continue in your same old ways of thinking and doing. But things change, and if we don’t change accordingly we get more and more uncomfortable.

N – Normalize what’s making you uncomfortable, as much as possible. Being uncomfortable is not always bad or wrong. Sometimes it’s just normal. Don’t let the discomfort lead you to “awful-ize” the circumstance. Accept it for what it is. It’s just uncomfortable.

Though it doesn’t feel like it, being uncomfortable can actually be the catalyst for something new and better in your life. My daughter recently gave birth to her second child. The week before delivery, she and her unborn child were “running out of room” and getting very uncomfortable. This uncomfortableness eventually led to the birth of a beautiful little girl. It was difficult to endure and there was some pain involved, but in the end being terribly uncomfortable brought about something new and precious.

With that in mind, here are some questions for you…

We all will be uncomfortable at times. The question is…will we face the discomfort and allow it to teach us, change us, and grow us?

But Psalm 23:4 give a clue as to how we can face uncomfortable. It says…

Even when I walk through the darkest valley, I will not be afraid, for you are close beside me. Your rod and your staff protect and comfort me. (Ps. 23:4 NLT)

We are to face the uncomfortable, not by going around it, but by going through it. Not by fleeing it but by facing it. And you face it by focusing more on the presence of God with you than the uncomfortable problem facing you. Easier said than done, but it’s possible.

Let me stress again…if you are facing abuse that is physically, emotionally, or sexually threatening, you should do what you  need to do to remove yourself from that situation! Don’t confuse uncomfortableness with abuse. But if that’s not the case, take the time and effort to learn how to get comfortable with uncomfortable.

2 thoughts on “Get Comfortable With Uncomfortable”