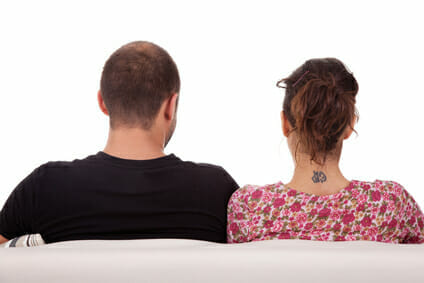 One of the laws of attraction has to do with proximity.  Simply put, the more people are in continued close proximity to one another the more likely the attraction between them will increase.  (I suppose if you’re both angry with one another, continued close proximity could also cause your aggravation to increase…but that’s a topic for another post.  For now, let’s assume things aren’t that bad.)

What happened is you got married.  That’s not meant to be a slur on marriage.  It’s just that once you’re married, being together is not a rarity.  It’s common place.  You take it for granted.   It’s been said that familiarity breeds contempt.  Hopefully it won’t get that bad, but familiarity in marriage often breeds complacency.  When that happens, one of the first things to go is sitting together like you used to.

In our marriage, I began to noticed that our evening routine consisted of my wife sitting on the sofa on one side of the room and me sitting in a recliner on the other side of the room.  On top of that, we were both on our iPads and not really talking to one another.  We weren’t mad.  We were just in our own orbits.  On a rare occasion, I might go sit on the sofa with her, but even then she was on her end and I was on mine.

So recently, when it was time to replace some furniture, we decided to get a love seat with built in recliners.  The purpose was to allow us to sit close and still stretch out.  The evening it was delivered, there we sat.  Side by side on the love seat.  Watching movies and reading.  Though we still didn’t talk much, that evening had a completely different feel than those evenings when we sat on opposite sides of the room.  (Maybe that’s why they call it a love seat.)

So try sitting together more this week, and then send us a comment and tell us how it went.

4 thoughts on “Little Things Mean A Lot – Sit Together”