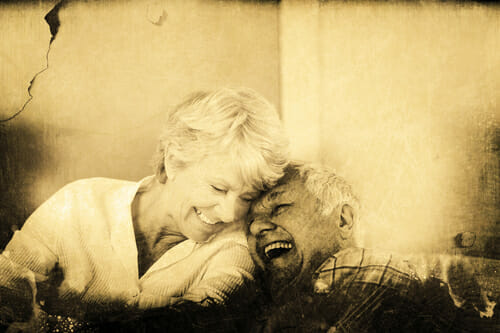 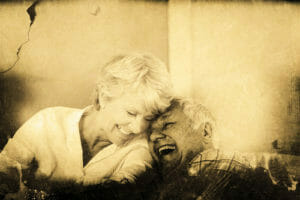 What is it that helps a marriage stay together for seventy-two years? Truth be told, there are several things that contribute to a long marriage, but one thing that is often overlooked is summed up in a saying that originated with Oscar Wilde:

“Life is too important to be taken so seriously.”

I believe this wisdom can be applied to marriage. Marriage is too important to be taken so seriously. Before you think I’m being flippant about marriage, let me say I am very serious about the institution of marriage and want to do anything I can to help marriages succeed and go the distance.

But I think we can be serious about marriage without being so serious in marriage.

Marriages that go the distance go through following stages:

If you were to draw these stages out, they would look like this:

The “X” marks the spot where a marriage begins to turn from the downward slope of seriousness to the upward slope of balance. You start learning not to take everything so personally and so seriously. You begin to find balance by learning to be playful again, which will offset some of the seriousness of marriage and eventually lead you to a deep and abiding comfort with one another. Like the Bible affirms,  “A cheerful heart is good medicine, but a broken spirit saps a person’s strength.” (Proverbs 17:22 NLT)

Back to the couple that had been married for seventy-two years. A couple of years before the wife’s funeral, I asked the two of them what they thought was the secret to such a long marriage. The husband said, “Son, you have to learn to have patience. Sometimes, when you’re frustrated with your spouse, you have to just go outside and take a walk.” Then the wife chuckled and smiled. She looked at him and wryly said, “You’re not the only one who had to have patience and take a walk.” Then they both smiled at each other and chuckled. And there it was…seventy years of marriage, and the playfulness was still there. I want to be that like when I grow up!

Has your marriage become too serious? Have you forgotten how to be playful in marriage? If so, I challenge you to do two things. First, find one way in which you can begin to reclaim some playfulness in your marriage. Second, share your ideas with the rest of us in the comment section. We all need the help.

1 thought on “Why So Serious?”