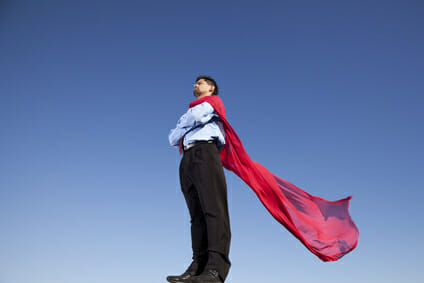 When I was out for a walk the other morning, I found a small Batman action figure facedown in the middle of the road. It had been run over and was scarred and marred. I picked it up and set it to the side of the road so the child who owned it might find it. Then I walked away a little sad. Why?

You see, I spent my childhood dreaming about being Batman. Yeah, Superman was cool with his ability to fly, his strength, his x-ray vision, etc., but that all seemed a little out of my reach seeing that Superman was an alien. But Batman was not an alien. He was just a normal guy who made the most of his resources. That seemed more accessible to me.

But now, the symbol of my childhood aspirations lay face down in the road. Run over by some minivan on its way to work.

Have your dreams been run over? Life can do that to us. We have these dreams when we’re young, but as the years pass those dreams seem to morph into other things. Mine morphed from crime fighting to bill paying. From capes and cowls to business casual. From side-kick to spouse. From Batmobiles to mini vans.

Don’t get me wrong. I love my life. At the risk of sounding like a Hallmark card on steroids, I have a wonderful wife and family, complete with sons-in-law and grandchildren. I have a great job and ministry where I get to do what I love. I have a great faith and great friends. You get the idea.

But there’s still a part of me that wants to hang onto those dreams of being a hero.

So I’m thinking about all of this while I’m walking and it hits me. Maybe I already am Batman. Now before you call the authorities and have me committed, hear me out. Batman leverages everything at his disposal to help victims and those who can’t help themselves. He seeks to do something about the injustice he sees. And he seeks to do all of this without fanfare or the need for recognition…in the shadows. I’m not saying I’ve got this down, but every time I lend my time, talents and energy to someone who needs it…every time I try to right some sort of wrong…every time I do this without calling attention to myself…is that not what Batman would do? Though I’m not sure the utility belt would fit this 55 year old frame, perhaps I can still be Batman!

Now here’s my point…Have your dreams been run over? Has your childhood aspiration been left facedown in the road? Does it feel like you’ve picked up your dream, set it aside, and walked away from it? Perhaps it’s still a dream you can fulfill, but in a different way.

What about you? Will you pick your dream, dust it off, and see how to make it work with where you are and what you have? What have you got to loose, but some mediocrity?

And by the way…I still read comic books every day at lunch, so maybe there’s still a Bat-signal out there with my name on it.

Now let’s take all of this to another level…

There was a time in Israel’s history when there was a great need for a hero. It was a time before Israel had a king and neighboring nations were raiding and over-running the land.

So God enlists the help of a very unlikely hero by the name of Gideon. Gideon was an unlikely hero, because he was from a very blue collar group of people and he was so scared of the invaders that he hid in a hole in the ground just to do his work.

When God approaches him, Gideon protests the enlistment saying he’s really not the hero type. But God tells him, “Go in the strength you have and save Israel out of Midian’s hand.” (Judges 6:14.) (You can find the whole story in Judges chapter 6.)

God seems to be telling us that a hero is someone who uses what he has to obey God. That puts being a hero in everyone’s reach doesn’t it?

2 thoughts on “Have Your Dreams Been Run Over?”