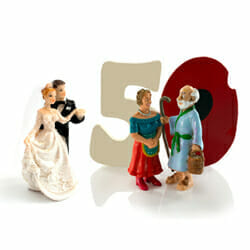 It was a busy Saturday for my wife and me.  We had two celebrations to attend in the same afternoon.  One was a wedding, and the other was a celebration of a 50th wedding anniversary.  Later that evening, after attending both events, I was thinking about those two marriages.  It was like someone had called up marriage on the DVR and then pushed fast forward.  From zero to fifty in one afternoon.

This made a big impression on me.  (I guess I should get out more.)  I noticed that both events involved a happy couple, a big guest list, a great celebration, and a strong focus on commitment.  But the two events were also quite different.

With the 50th wedding anniversary…

Marriages tend to start off formal, organized, and looking good.  There’s a lot of emphasis on things being “just right,” and the majority of the focus in on the couple themselves.  These marriages have the promise of commitment.

But marriages that have gone the distance wind up more informal, more disorganized, and looking a little worn.  There’s less emphasis on getting things “just right” and more emphasis on making things work.  Somehow the focus moves from the couple themselves to their many relationships.   These marriages have the demonstration of commitment.

Marriages that go from zero to fifty wind up in a better place than they were when they started.   It doesn’t happen in an afternoon.  It takes a life time, but what a life time!

Can anybody say, “Zero to sixty?”

Do you know someone whose marriage has gone from zero to fifty, or sixty?  If so, leave and comment and tell us what you think got them there?  For extra credit, go to them and ask them what got them there.  It will be a conversation you’ll cherish.

3 thoughts on “From Zero To Fifty In One Afternoon”